Drum roll please! At long last, I bring you the results of a great deal of testing. Here’s the background:

I’ve said my preamble in those posts, so I’ll cut to the chase here. 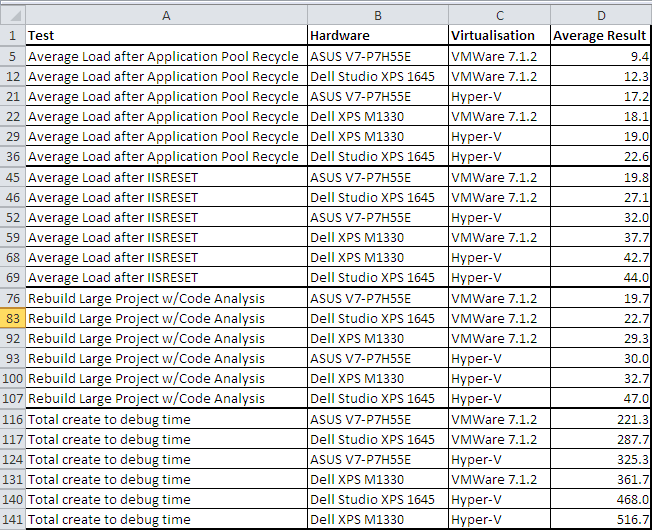 How to read the data:

Hyper-V versus VMWare tests, all other things being equal

ASUS V7-P7H55E desktop, running Hyper-V
Note: these Hyper-V tests were accidentally carried out while the VM was running on a RAID 0 stripe rather than on the System disk, so this is not apples and apples, but later disk tests on VMWare Workstation indicated that this shouldn’t make much of a difference, so I’ve left these results in, with this comment.

VMWare Workstation i7 tests with 4 or 8 cores

The format of these tests change slightly, as I am grouping all disk permutations for the Dell Studio XPS 1645 together, then moving on to the ASUS V7-P7H55E desktop. I grouped them this way because the tests were fundamentally different for laptops and desktops. I did not get the time to repeat the laptop tests on the Dell XPS M1330.

…and with that, I’ll let you draw your own conclusions. Should anyone want to contribute supplementary test data in the comments here, or carry out further tests (perhaps with SSD), I would love to see the results. As I mentioned in the last post, there’s still more testing to do.