Windows Server 2012 R2 introduces a number deep changes to the way that AD FS works, which means that as practitioners, we need to look for solutions to problems in new, unexpected places. For instance, in the old world, if AD FS was completely unresponsive, the first place I would look after AD FS itself would be IIS. In AD FS 2012 R2, IIS doesn’t play a role. Requests are still served by the HTTP.SYS kernel driver but we interact with it using NETSH HTTP, which connects to the driver via the User Mode HTTP Server API. IIS and other familiar components would also interact with this API previously, but they provided a friendlier layer of abstraction between an administrator and the API. Interacting with HTTP.SYS using NETSH HTTP brings a learning curve with it, particularly when it comes to understanding what is and is not controlled here. Also, there is no GUI and the security that HTTP.SYS enforces is stricter than the abstracted layer that IIS has historically opened up. This web server architecture change and other new differences add to the difficulty of tracking down problems when things don’t work as expected, as detailed in this post.

When updating the URL of an AD FS service, the first and most obvious things to change are the Service Communication Certificate, Name and Identifier. These are all changes that are exposed through the AD FS administration console or through Set-ADFSProperties and Set-ADFSCertificate.

Update: 14 January 2015
A couple of weeks ago Adam Lepkowski recommended an improvement to this section with the Set-AdfsSslCertificate cmdlet, which addresses some of the shortcomings I describe below. For coherence, I will leave my bits untouched, and include Adam’s comment here as an improvement that everyone can take advantage of. I think that seeing my clunkier approach actually helps reveal what’s happening under the hood, so I’m not going to change this content, but I will use Adam’s method in future myself.

SSL binding can be added in such way:
– Run Set-AdfsSslCertificate -Thumbprint thumbprint_here
This command will add new entries for ports 443 and 49433 and update existing localhost binding. 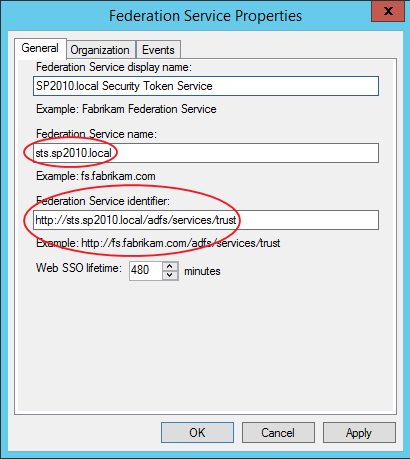 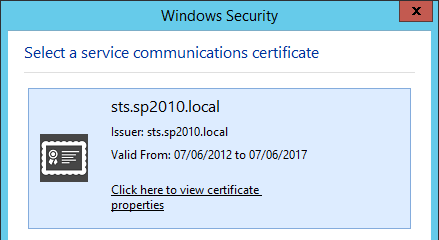 NB: I don’t recommend using .local. This is actually a domain that we’ve moved away from, but for this post it was easiest for me to use these resources.

At any rate, these changes work, as they always have done. We can see the changes in Get-ADFSProperties and Get-ADFSCertificate clearly after making them. 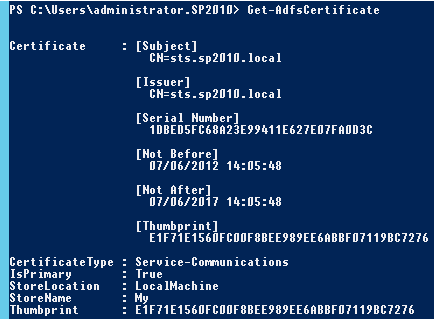 However, as before, we also need to apply these changes to the underlying infrastructure. In the past, this would be a matter of updating the IIS binding, but now we need to invoke the NETSH HTTP commands to interact with HTTP.SYS. The NETSH HTTP SHOW URLACL command unveils listeners, but by default AD FS will reserve a wildcard (+) listener for a port and path, for instance https://+:443/adfs/ or https://+:49443/adfs/, so there isn’t anything to change for the Host Headers (URL reservations).

On the other hand, the SSL bindings may need to be updated and they are configured in a much stricter manner than we normally see in IIS (unless we’re using SNI). Indeed, the default HTTP.SYS configuration in Windows Server 2012 R2 assumes the use of TLS extensions like SNI. Using the NETSH HTTP SHOW SSLCERT command I will see that my current configuration still references the SSL bindings for my old SSL certificate and URLs. 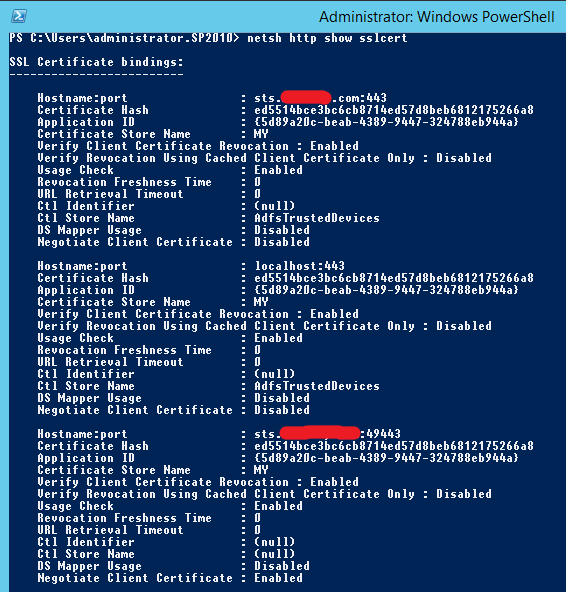 Because I’m also updating my certificate at the same time as my URL, all of these bindings need to be updated (to use both the correct certificate and URL). Referencing the old GUID for the Application ID, we can make these changes using NETSH HTTP ADD SSLCERT. Note: due to the way that PowerShell handles the curly braces around the GUID, we need to construct this in a fairly awkward fashion:

This needs to be repeated for the port 49443 binding that’s responsible for Certificate Authentication as well, when that’s required:

And the old bindings need to be manually deleted:

Although we shouldn’t rely upon the localhost binding, we’ll update that as well, as otherwise it will be secured using the old certificate still. You never know when failing to update this might cause a problem. And you’ll note there is no update command (that I can find), so we need to delete the old binding and create it anew.

After making these changes it should be possible to successfully browse to the new Federation Metadata URL, as an indicative test that things are working: 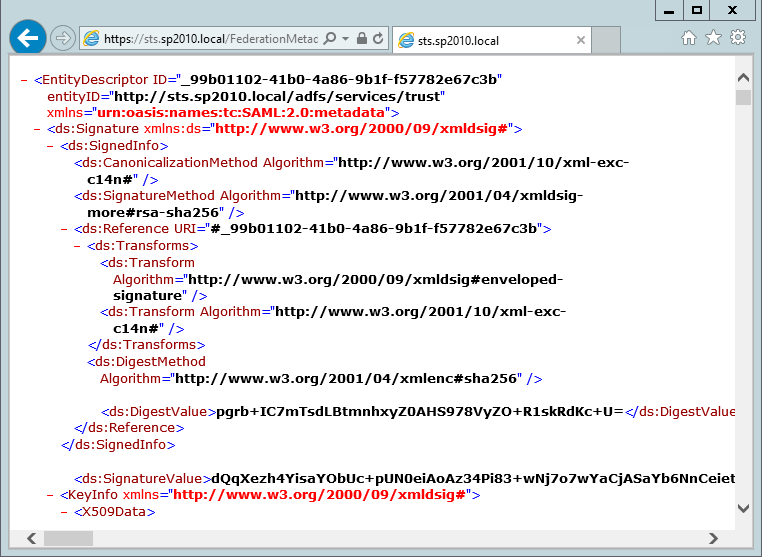 This would be a really good time to make sure certificate trusts are in place, all the way up the chain as needed. Things will break later if this isn’t done. And with that, the first changes are done.

Changing Relying Parties to use the new URL

Once we have a responsive Security Token Service on our new URL, we need to update the Relying Parties that AD FS serves. There’s no way I could document all of these, but since this process is surprisingly poorly documented for SharePoint, I’ll detail what it looks like for SharePoint 2010 here. Before running this, it’s important to understand that updating the .Name value will break user profiles so I generally recommend against this. You need to live with the old Name and DisplayName, which may be confusing, but the alternative means migrating all user accounts and updating all Authentication Providers, which will be disruptive in a production environment. Making this update to the SPTrustedIdentityTokenIssuer requires use of the Get and Set cmdlets to make the change in full.

#Note: The ProviderUri parameter in the Get cmdlet equates to the SignInUrl in the Set cmdlet.

Note: this process is dramatically better than the alternative approach of deleting and re-creating the SPTrustedIdentityTokenIssuer, as that will break any User Profile Synchronisation Connections that depend on it. Avoid!

After making these changes, we should have a totally updated AD FS. But what if we’ve published AD FS and Relying Parties outside the corporate network using the Web Application Proxy? If so, our work is not finished yet.

Updating Web Application Proxies to use the new URL

Before I plunge in too deeply, I have to mention that I’m not sure which of these steps (if any), will be needed if the Web Application Proxy is deployed for the first time after the changes above have been made. My gut feel is that none of them will be necessary, but for reasons that will become clearer soon, I can’t speak to that scenario with any clarity right now.

The Web Application Proxy has a method for updating the Federation Service URL that it proxies. The Install-WebApplicationProxy cmdlet can be used to make changes to the certificate that it uses to publish AD FS or the internal and external URLs. In the case that I’ve been stepping through here, the update looks like this:

Unfortunately, this change was insufficient to successfully proxy any of the Web Applications that had been reverse-proxied by this server. I did successfully re-establish communication with AD FS, and my old published applications were all visible in the Web Application Proxy administration console, but I couldn’t access anything from outside the network except for AD FS itself (via the Federation Metadata URL, as described above). All of my Relying Parties redirected to the old AD FS URL, but this was only happening via the reverse proxy.

Confronted with this problem, I tried a number of things unsuccessfully:

At this point, I made sure to undo any of this crazy stuff and went back to the beginning. I had already reviewed the URL reservations in NETSH HTTP SHOW URLACL. I found the port/path reservations as on my AD FS server, plus my reverse-proxied URLs. Nothing here appeared to warrant a change. Similarly, when I reviewed NETSH HTTP SHOW SSLCERT, I found that my reverse-proxied URLs continued to use the same certificate they were using before, and my new AD FS URL was bound with my new certificate via the original Install-WebApplicationProxy change.