Continuing this series about the SharePoint 2010 IRM implementation, in this post I’ll keep looking at the Work E-mail Address attribute in the User Information List, but focus specifically on how the initial value in that field gets populated from different sources for different Authentication Provider Types. As with the fuller picture considered in the last post, this is a lot more complicated than anyone would expect at a glance, but it’s really the lynchpin of this functionality – thus the depth here.

Posts in this Series

In the first scenario, we’ll consider how Classic and Claims-Based Windows-authenticated users get a Work E-mail address value in the User Information List, either when an individual user is added to a Site Collection (rather than as a member of a group) or when they log in to a site for the first time (after getting added by group). For these users, the RMS protection process should work reasonably seamlessly, assuming Active Directory is in sync with SharePoint and the user has a mail value in Active Directory. Keep in mind that this is not always the case. For instance, if the user doesn’t have an Exchange mailbox this value will have to have been populated manually or by some other process. But if all of this is in order then we can spot the Global Catalogue query (from the SharePoint WFE that’s serving the request) for the new user in a network trace. 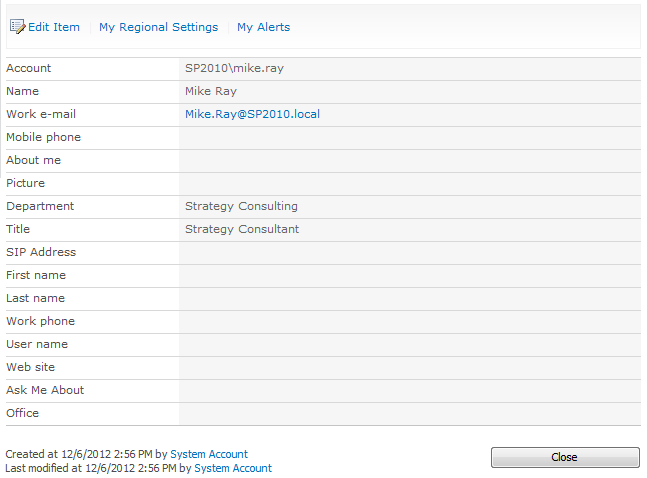 For SAML Claims users, the story is more complicated. If you aren’t interested in that scenario, I suggest you skip down to the bottom of this article for a few words about FBA and multiple authentication providers.

What all this means is that we really need user information updates from the User Profile Service in order to reliably provide access to RMS-protected content for SAML Claims users. This next set of information is more relevant to SAML Claims in general that just for RMS, but is nevertheless required to successfully synchronise the mail attribute from Active Directory to the User Profile service.

If these steps have not been carried out then the Timer Jobs aren’t going to push User Profile E-mail Addresses to Work E-mail Addresses in the User Information Lists, so any SAML Claims users who have been granted access as an individual (rather than by some other Claim) will not be able to access RMS-protected content, since the Work E-mail field will remain empty.

While I’ve not spent any time properly investigating RMS support for FBA Claims users, I believe the scenario is largely similar to how it works for SAML Claims users, as described above. Certainly we’re assuming there is an AD user behind the FBA user, and the User Profile to SharePoint Synchronisation Timer Jobs are likely to play a key role, as above. The one thing I’m not clear about is how/if a Work E-mail value would ever get assigned before the User Profile to SharePoint synchronisation process occurs, presumably from an FBA role. I may revisit this later and provide an update here if time permits.

I’ve also not looked at how any of this works with multiple Authentication Providers on a single zone. I’m guessing this would work as it does above, based on how that user signs in or the provider where they’ve been picked from (if added as an individual). In either case, I can’t understand how this would vary significantly, since the user is bound to the Authentication Provider, but at this point I can’t offer anything more interesting than reasoned speculation.

In the next post in this series, I’ll tie all of this together by looking at an end-to-end request for AD RMS-protected content from SharePoint 2010.