In my last post I discussed how the Product Version Job timer job uses the Windows Installer Service to query the installed state of SharePoint 2010 servers and how the Manage Patch Status page in Central Administration displays this information. I also touched on my reservations about what we can infer from this data. In this post, I’m diving a bit deeper in to that question.

A quick word about the DCOM Permissions

In my last post, I put off a discussion of the security implications of granting the Farm account DCOM Local Activation rights to the Windows Installer Service (in order to clear the DCOM 10016 event log errors). I was worried about this approach, since this DCOM Component opens up the Windows Installer, which represents a different type of security risk than say… IIS WAMREG. Following my last post, Spencer Harbar suggested that these worries were unfounded, or rather, that the risks are acceptable, since it’s only a risk if the Farm account gets compromised. He rightly pointed out that you’d be pretty stuffed at that point anyway. Fair enough. To this end, I’ll join him in not worrying about it.

Despite carrying a lighter weight on my shoulders, I think it might be helpful to review what came out of my testing, as the job may not be detecting everything we’d expect at face value. I’ve also poked a few more holes in the Support response, which was the whole reason I started working on this in the first place.

In these tests, I’m wilfully trying to do stuff you would never want to do in any farm – just to find out what the job “knows” about. To this end, I’ve tried some pretty foolhardy things like:

Are these the right tests? They certainly aren’t comprehensive. Suffice it to say I’m not the right person to comment on what the Windows Installer might be able to detect. In the process of researching this I’ve already become far more acquainted with Reflector and the Windows Installer than I ever hoped to be. I’ve even found out that there’s a Windows Installer blog and Windows Installer MVPs. Who knew? But are these changes the types of things that could cause disruption in a farm? Probably. And should we understand if the Manage Patch Status page in Central Admin accounts for problems like these? I think so. Thus, this imperfect testing by the wrong person.

In the first two tests below, I copied DLLs out of an installed instance of the December Cumulative Update and replaced the installed June Cumulative Update versions of these DLLs in another machine with these newer copies. The DLLs I was looking at were for Microsoft Excel Services Components and Microsoft InfoPath Forms Services (this is how they are listed on the Manage Patch Status page).

Manually replacing a DLL in the GAC

When I manually deleted my June CU Microsoft.Office.Excel.Server DLL from the GAC using GACUtil (as you shouldn’t do), and replaced it with a newer version from the December CU, I broke my Excel Services Service Application. When I ran the Product Version Job timer job it failed to detect the change (the new version was never reflected in Manage Patch Status). Everything looked exactly as it normally would in the application event log, except for this message immediately after the normal 1015/1035 entries: 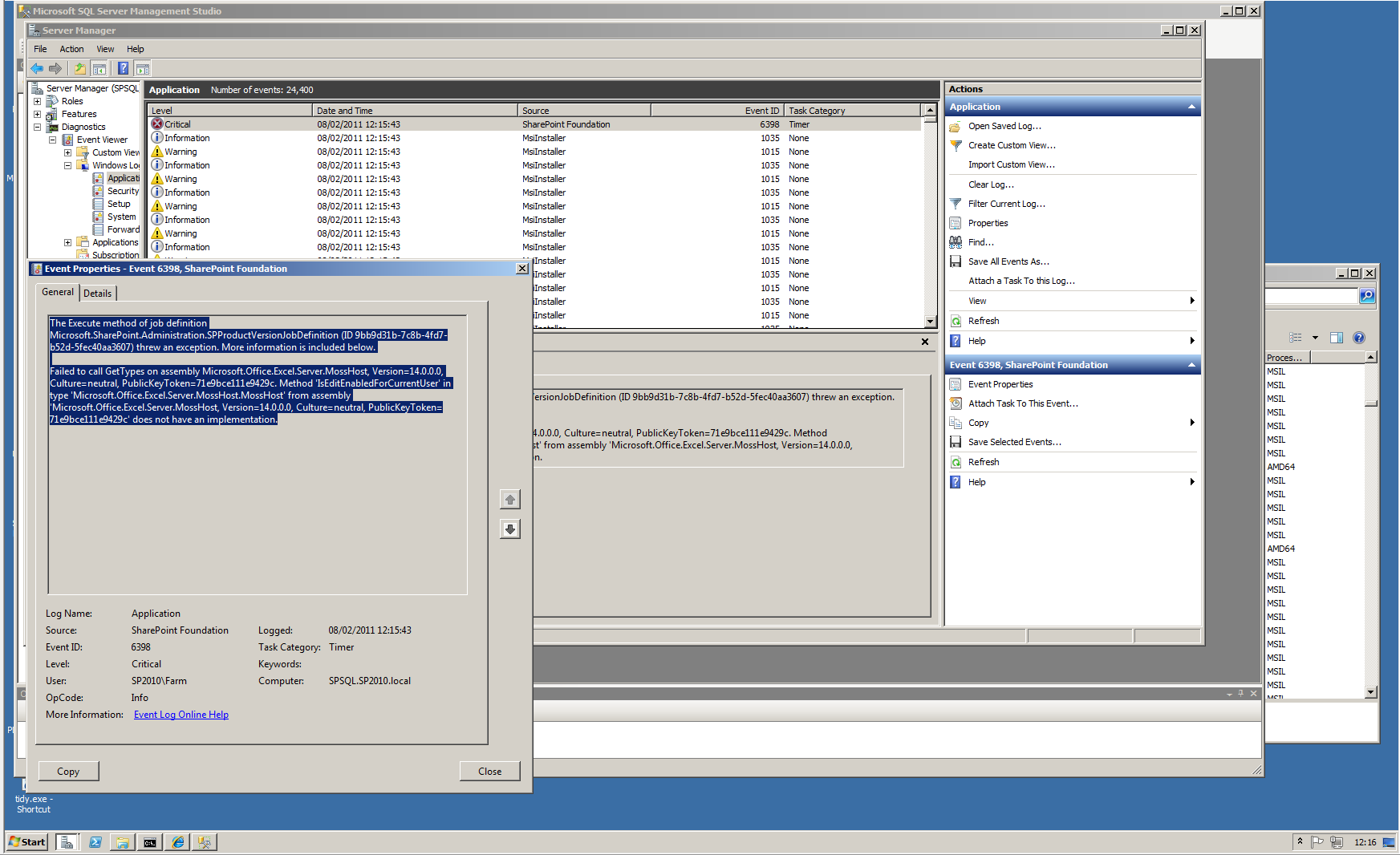 This error is informative, and would probably help me track down the issue in due course, so the Product Version Job is earning its keep, but it’s unfortunate that this version change is not displayed in Manage Patch Status in any way. In short: this is a good reason to run the job but it’s also good to know this kind of problem won’t appear in Manage Patch Status.

Manually Replacing a DLL version in the Program Files directories

Next, I tried to manually replace DLLs in the Program Files directories with newer versions. I searched throughout the Hive and the C:Program FilesMicrosoft Office Servers14.0 directories for other versions of these files. I was working on the assumption that the version in the GAC would be in use (thanks to Chris O’Brien for this advice), but I wanted to see if the job would successfully spot changes in these Program Files locations, since this is what the Microsoft Support response suggested.

I found the same InfoPath DLL and a differently-named Excel Services DLL in these locations:

I ran the Product Version Job after deleting these files and rebooting. Again, the job failed to detect the changes.

If the farm account has DCOM Local Activation rights on the Windows Installer Service, it resolves the DCOM error event log clutter, but these rights don’t impact whether the job can detect these changed DLLs.

Killing an installation part-way through

Running the Products Configuration Wizard after fixing the failed installation

Later, I fixed up my December CU installation and ran the Products Configuration Wizard. When it was running, I could see that something very similar to the Product Version Job was logged. The same informational events (1035) appeared successfully in the application event logs, without any DCOM errors or “Failed to Connect to Server” (1015) application event log warnings. Presumably this succeeds (with or without the DCOM rights) because the Setup account that’s running the wizard is a local admin and therefor already has the DCOM Local Activation rights. However, I’m not sure what’s gained by updating Manage Patch Status at this point, since the dbo.ServerVersionInformation table was already updated by the installer. I won’t dwell on that thought too much though, since there may be a very good reason for the update at this time.

For those who are interested in the workings of this update, it’s worth noting that the Products Configuration Wizard appears to use the Microsoft.SharePoint.Administration.SPServerProductInfo.UpdateProductInfoInDatabase(Guid serverGuid) method. It effectively calls the same thing as the Product Version Job timer job, if I’m reading all of this right. A fuller glimpse of the ULS logs looks like this:

It’s also worth noting that this log entry correlates with the MsiInstaller 1035 success events in the application event logs that I mentioned above.

What about deleting DLLs?

While investigating this, I ran all of this by my colleague Jalil Sear. He came up with an interesting idea: that I shouldn’t just update the DLLs, but I should try to delete them altogether. So I deleted Microsoft.Office.Excel.Server and Microsoft.Office.Infopath.Server from the registry and the GAC and reset IIS. I re-ran the Product Version Job and it completed normally, with and without DCOM Local Activation rights. Nothing was detected, although my entire Manage Service Applications page was annihilated. Again, we might have expected this to be reported in Manage Patch Status.

Putting this information to use

I wouldn’t suggest reading this as the full story, since I only ran these against a single SQL/SharePoint box. At a minimum the Product Version Job can detect product version mismatches when a server is restored, and servers in long-term mismatched states. As a plus, it will throw an error in your application logs to let you know if there’s something wrong with the DLL that it expects in the GAC. Unfortunately, that isn’t reported to Manage Patch Status. In any case, as teams/farms increase in size this job becomes more useful for shared understanding.

At the end of this review, I think the important thing is to recognise the limits of the data in Manage Patch Status. It’s not going to be bullet-proof. For any actions taken with the Windows Installer, this data should be pretty reliable, since it’s updated during install, with the Products Configuration Wizard and with the Product Version Job. For anything else – who knows? It doesn’t appear to have been designed for that, and I have no idea what a SharePoint timer job would look like that could offer these kinds of assurances. Presumably it would have to be a management agent of some sort. At that point you’re in to Configuration or Operations Management territory and we already have different tools for that. Come to think of it, if you really want to know, “the install state of the machine“, that’s probably what you’re really looking for. But if you want to know the current versions of successfully-installed SharePoint Products on all servers in your farm, then Manage Patch Status should be accurate in most cases, because of the Product Version Job.