In my previous post I introduced some of the peculiarities of designing SharePoint 2010 environments for Amazon’s EC2, specifically focused on the AWS platform, storage, snapshots and provisioning. In this post I continue this exploration, moving on to cloning and networking considerations.

In our testing, we were able to run multiple instances of the same AMI concurrently, which can be desirable if you have a team of developers with similar or identical requirements. We could run these instances beside each other without conflicts because we had all roles (including the DC/DNS) on one machine and we locked down the firewall, which is advisable anyway in the cloud. We only allowed the RDP port inbound to start with, and opened HTTP/HTTPS traffic where it was helpful to do so. This cloning story would get much more complicated with multiple servers, as I discuss in more detail in the networking section below.

One big “gotcha” in this area is the default settings of the EC2 Service Properties when Amazon’s Windows AMI is launched initially. This is one of the few additions that Amazon packages with their Windows image. In the EC2 Service Properties you should de-select the Set Computer Name and Set Password options. The Set Computer Name option seriously causes problems for SharePoint, as it changes the Machine Name whenever the instance is started up. The good news is that you only need to do this once if you will be creating a new base image. Just be careful not to change this setting back later on. 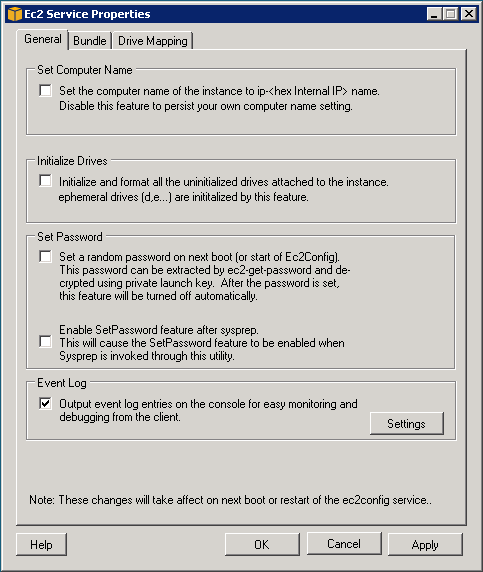 As I’ve mentioned before, SharePoint 2010 development environments need to be members of a domain in order to successfully deploy the Search or User Profile Service Applications, but unfortunately dynamically-assigned IP addresses and domain controllers don’t play nicely together. I shan’t delve in to those details much here, but this has been known to cause problems with start-up times for DCs, and member servers won’t know how to find the DCs once the DC’s IP address changes. Additionally, there are Firewall policy implications.

With the exception of the Virtual Private Cloud (discussed below), we had to rule out persistent multiple-server farms for these reasons. The complexities of managing this stuff on a daily basis would be beyond most users and would probably create system instability or at the very least, add cost (by leaving the DC on all the time). The option of adding a second DC for resilience and to possibly work around some of these issues would add further complexity and cost. Basically, this wasn’t working.

The only viable approach we could find for working with DCs on DHCP was to make the SharePoint development machine the domain controller. This is a step backwards in many ways, as this configuration has been known to cause issues. As I summarised in March 2010 (from the link above):

Having said all of that a while ago, based on lesser-performing equipment, we didn’t actually find that performance or installation were particularly troublesome on EC2, although we did encounter a security policy issue or two. I still have reservations about the code quality that will emerge from development on a domain controller, but if this is acceptable for your requirements then I think this is the most significant Private DHCP issue conquered. If not, you will probably need to look at the Virtual Private Cloud. Other topologies are conceivable but with even more complexity than we’re already contending with. These are unlikely to be broadly usable.

The primary issue with dynamic public IP addresses is finding out what the new address is. This is easy enough if you have access to the AWS console, as you can pull the new address directly from the instance description and even download a file to launch an RDP connection to the new IP address directly. However, it’s very unlikely that it will be acceptable to give access to the AWS Management Console to all users. This leaves three options, as I see it:

Whatever the solution, it’s likely to form part of the broader question of administration, management tools and delegation, which I’ll come back to in the next post. I believe this can be solved without too much difficulty, but it requires some thought along these lines in order to avoid a mess.

One way that Amazon has tried to ease the pain of Public DHCP is the Elastic IP Address. By default, each customer is given five, although you can request more. Elastic IP addresses are applied to an instance while it’s running. A few minutes after it has been applied it takes over from the DHCP-assigned address and users can access the instance at their usual address. However, this requires intervention by an administrator to associate the Elastic IP Address with the instance after it’s been started. Alternately it can be scripted. Just keep in mind this is another option that probably isn’t best delegated to everyone by giving all users access to the AWS console.

One thing that’s particularly crafty about Elastic IP Addresses is that you are charged $.01 for each hour they are not in use. If you’re diligent about turning off your machines when you’re not using them, you will get nailed for not using the IP address. Granted, it’s a small charge and with IPv4 address supplies dwindling very quickly, perhaps not that unreasonable.

In my view, Elastic IP Addresses probably aren’t going to solve a lot of problems, but in some cases it may make things easier – particularly if pointing DNS at these addresses.

The Virtual Private Cloud (VPC) is effectively a VPN connection between your network and AWS. It allows fixed private IP addresses, DHCP options like DNS/WINS servers, and allows you to connect existing assets to the cloud, for instance management or backup servers. This may also help with SSO. I shan’t belabour the design options for the VPC, because at face value it should be pretty obvious if it’s the right fit for your uses. There are obvious security considerations about opening up this communication across the WAN to a third-party, but that’s not to say there aren’t ways it can be set up well – for instance creating a dedicated domain in the VPC.

The most important thing to know about the VPC is that when instances are launched they only get a NIC with an IP address on a VPC subnet. There is no public IP address for the instance. This means the only way you can access the instance is via the other end of the VPN (typically the corporate network). This may introduce some funky routing and potentially degrade speed/reliability for users working from home or on client sites. On the other hand, it may not. It’s critical that this option is thought through with a broad design team including internal network and systems teams. I would highly recommend testing/piloting this configuration as well (noting that the initial configuration may be expensive for a test, since it will integrate with production infrastructure).

I think the VPC can answer a lot of the shortcomings of the standard EC2 IP addressing approach if public IP addressing is not a requirement. I’m not sure why NAT couldn’t have been used to allocate fixed internal addresses by default, but it hasn’t been, so we’ve only got one way in to the VPC. Once in it, you can deploy single-server machines as we did without the VPC (assuming the firewall is locked down in the same way), or join SysPrep’d SharePoint servers to a shared domain infrastructure. This assumes SharePoint provisioning (scripting installation/configuration) is mature enough that manual configuration steps don’t impede productivity. Other topologies may be valid as well. In principal it shouldn’t be miles different from your LAN. The main things to understand is that the private IP addresses are assigned by Amazon and there is just the one way in. Note: there’s quite a bit to understand about planning the VPC itself, and pricing for that traffic, which is all outside of the scope of what I’m inspecting here, so please refer to the Amazon VPC resources for more information. Also be aware that it’s still in Beta.

Networking can be enough to melt anyone’s brain, so I’ll save administration, delegation and licensing until my next post.